I just found out about Brazilian funk music collective Heavy Baile thanks to this video (I know I’m late…). More importantly, this video is fun and original, showcasing one of the collective’s members, Ronald Sheick, jumping into the Metropolitan Museum’s classical art collection and at one point battling himself. #Decolonization always makes me smile :).

I put this here partly for the cuica…

For more of and on this kind of music, I recommend: 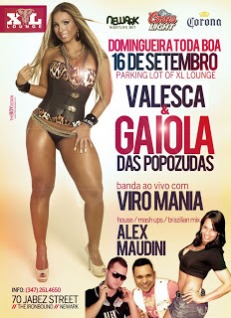 Brazil’s most famous funk group, Gaiola das Popozudas, performs in Newark next Sunday.
What is funk (pronounced fun-kee in Portuguese)? It’s now an internationally popular dance music created in the poor slums (favelas) of Rio de Janeiro. The funk rhythm is rooted in “Miami Bass” and has evolved to incorporate traditional Brazilian instrumentation and rhythm. For more on the history and evolution of funk carioca see Miamibasshistory.com and wikipedia.
Most Brazilians call the music funk, but it’s also referred to as Funk Carioca. The parties where they play the music are called Bailes, and this is why foreigners often call the music “Baile Funk”.

Fronted by dancer/singer Valesca Popozuda, the group was started in 2000 and has since risen to international fame with songs like “Agora eu Sou Solteira” (Now I’m Single) and “My Pussy é o Poder” (My Pussy is the Power). The lyrics celebrate female sexuality in a crass and vulgar way, which has caused some of their songs to be edited and censored by radio stations. In a February 2012 interview with well-known Brazilian journalist and talk show host Marília Gabriela, Valesca says that funk is now dominated by female groups and a mostly female audience. Many women have told her they identify with her music (watch entire Portuguese language video of this interview with Valesca).

Valesca started her career as a dancer on the funk scene and since performing with Gaiola das Popozudas she’s also been queen of several Rio samba schools. Valesca, 33, has a 10-year old son and speaks candidly about the plastic surgery she’s had augmenting her breast and buttocks, the latter of which is insured for $US 2.46 million ($R 5 million).
I think it’s kind of funny that her physical appearance and the group’s name (Popozuda means woman with a large behind) revolves around an African standard of beauty–the rear end.

Check out this video of a Gaiola das Popozudas show and their official website.
Download “Agora Tô Solteira”